An RC airplane radio system consists of a transmitter, receiver, servos and a battery. If it's an electric powered plane it will also have an ESC. 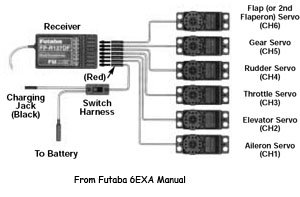 The servos and receiver battery simply plug into the receiver. Most people add a switch between the battery and receiver which is mounted to the side of the airplane.

RC radio systems have evolved quite a bit over recent years which can lead to a lot of confusion for a beginner.  Don't let the geeky details and jargon of radio transmission, modulation, frequencies intimidate you.

Not only are 2.4 GHz systems much simpler and safer to set up than older radio systems, there are a ton of other advantages with using 2.4 Ghz systems.

Amplitude Modulation(AM) - This technology is about as ancient as dinosaurs. But AM radios are still out there and still being used so it's worth mentioning.  With AM, the radio signal is switched on/off rapidly on a single frequency to modulate the input signal. AM is more prone to interference than frequency modulation.

Frequency Modulation(FM) -With FM, the carrier frequency switches between two different frequencies to modulate the PPM signal from the transmitter. FM is much less prone to interference than AM.

*If this is clear as mud, take time to read about the differences between PPM and PCM.

If you choose to use an AM or FM RC airplane radio system you have to be extremely careful not to transmit on the same frequency as someone else!

Now that you're familiar with what an RC radio does and how it works, it's time to talk about how you, the pilot, interact with the radio in order to fly your airplane. 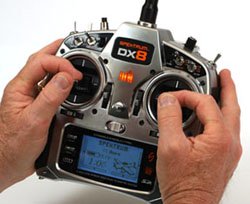 The next page, RC airplane controls, will get you up to speed on what a channel is, how many channels you need, and most importantly you will learn how to move the sticks in order to control your airplane.

One last note before I forget. Not all RC airplane radio transmitters have the sticks configured the same way. These different configurations are called transmitter modes. If you live in the U.S. it's a pretty safe bet your buddies at the flying field will be using mode 2.

Programmable radios not only make setting up your airplane a breeze, they also provide an entire range of features that maximize the performance of your airplane while making it much easier to fly. 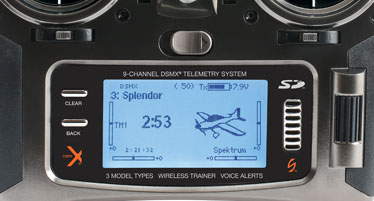 Without computer radios, the type of flying that many pilots now enjoy would simply not be possible, especially 3D maneuvers. You can mix channels, set end points of servo throws, adjust exponential rates, set high/low rates, program out bad flying characteristics of your airplane and much more.

The sky is literally the limit when it comes to how you can use your computerized transmitter, no pun intended. It's all explained in detail in the article Computerized Radio Control Functions!

Have a Question about RC Radios or Components?

Have a question about a specific radio? What receiver to use? Servo questions? How to set up a radio? Binding problems? Anything radio related?

Whatever question or problem you may have, you can rest assured that someone has been in your shoes and will have just the information you're looking for. So Don't hesitate to ask!

Answers to Other Visitors Questions

Click below to see the RC radio questions and answers from other visitors to this page...

I have two old Airtronic radio systems. These old radios were handed down to me. However, the sticker that shows the frequency of the transmitter has …

How do I know which channel in an AR410 Spektrum Rx to plug in the various servos on my plane. I have an ESC, Ailerons, Rudder, Elevator = 4 channels. …

My AR9000/AR9020 have been sent to Horizon Hobby for repair. The 9020 is brand new and the other about 6 months old. When binding both the satellites …

I am new to RC Flying. I recently acquired a J3 Cub 450. I have a spektrum 6XDi Transmitter and a spektrum AR6100e receiver. They will not bind. …

How do I get spoilers on my RC plane? I mixed the “I” switch (Spektrum DX6) to Rudder (which is Ailerons on my left stick) so now when I push the “I …

I bought a T-28 Trojan S as a gift two years ago. It’s been on the shelf since and never opened. My grandson found it and asked if we could fly it. I …

I want to use my "anylink" with my DX7. Works fine but the extra battery to power the anylink is clunky and crude. Can I power it with the transmitter's …

Hello, New to the hobby with just a quick question. I ordered a Hobbyzone T28 trainer, which suggest using a spektrum transmitter. I already have a …

Have a old futaba T9CAP and trying to find a receiver with 75 MHz 39 or matching pair , does any body know where to find them?

HI GUYS AND GALS,I NEED HELP TRYING TO FIGURE OUT WHY MY SPECTRUM AR400 RECEIVER WONT BIND UP TO MY SPECTRUM DX6 DSMX RADIO. I ASKED THE MAN IF THIS …

I have an impossible problem. 2 Futaba Transmitters and 1 Spektrum will not bind or link. All Transmitters indicate they are sending (1x Futaba T10CHG; …

Battery in a Radio transmitter

I am into Nitro easy going high wings mainly and my Trannie has given up after 30+ yrs. I now want a 2.4 Mode1 and have picked a Futaba 6K.Now,having …

The rudder servo will not operate properly.The others are okay. Is this a receiver problem? Can a new receiver be used with the system. If the crystal …

Hi from uk wherever you are??......ive recently bought a brand new conscendo s glider with a as3x receiver ...ive flown it three times and crashed …

looking for accessories for older Helicopters

Hello I have 2 helicopters that is making me pull my hair out looking for some parts for them. One is a Dragon fly or schweizer 300 c heli that calls …

I have several helicopters and was wondering I bought another heli that has no transmitter.The frequency sticker on the heli says 27mhz and it is white. …

Hi,I have a spectrum dx8 radio that I would like to be able to adjust the gain on the knob switch on this radio.The gyro I want to us the power box 3e …

Thinking about getting back into the hobby and bring out my old planes ( kadet senior, p-47, pt-19, stuka, dr-8, etc.) my old radio system was/is futaba …

What is the best way to mount the receiver in your plane? Mount to a wall or wrap in foam?

I'm making a homemade rc P-51D Mustang, but I couldn't find any receivers small enough to fit inside. Is there a tutorial on making a 5ch TX/RX system? …

I am in need of a redundant reciever battery combination. I can find no info on how to safely implement this. I have heard of them being used in large …

Reading your comparison of dx7 dx6 and dx6i I was convinced I only needed the dx6i. However looking at other sites it appears the dx7 is discontinued …

I just bought a phantom I (2.4 ghz transmitter) and I have read that if you don't turn off your mounted hero3 wifi (2.4 Ghz) it can fly away because of …

RC Radio that works for all Brands?

Is there a radio that can handle all brands of planes? Really sorry for this silly question. I'm new to this. I've been buying Parkzone and Hobby Zone …

I have a nitro trainer 4 channel plane, where do I connect the battery on a 4 Channel RX ? I have an AR400 Spectrum, do I need a 5 channel RX? My transmitter …

I have a 1984 Towncar. I had a remote engine starter put on, but the engine will not start cold, unless you pump the pedal once to set up the throttle …

Only one Tx for two planes?

I bought a RTF-plane. You know it has everything you need, right? But, there are those "almost ready to fly" planes, where you need only to buy a TX. …

Question about receivers for DX6i TX..

Hello boys and girls.... I have a question..actually, I have a lot as I am newbie, but I'll keep it down to one. I am using a Dx6i Spektrum Tx …

How to choose RC Plane Radio components Not rated yet
I have been out is RC Airplanes for 20 years and wish to get back into the hobby. I understand the concept of the new systems frequency hopping. …

Range for Radio controlled payload drop system Not rated yet
I am trying to build a Payload drop system for my drone. I am going to use it to drop live bait out off the beach to about Maybe 1/4 of a mile out. Now, …

camber mix  Not rated yet
I have a Great Planes Zlin Acrobat. Fun to fly but lands like a rocket. Has anyone had success with using camber mix for landing this airplane?