Hobby Zone RC airplanes are designed with the beginner pilot in mind.  They're simple, inexpensive, sturdy and are fairly easy to repair. And most importantly, spare parts are readily available.

As a matter of fact, I taught myself have to fly RC with the infamous Aerobird.

Hobby Zone has since retired their V-tail series of park flyers and moved on the more conventional aircraft.

Let's take a look at what Hobby Zone has to offer...

The Super Cub is Hobby Zone's flagship airplane. It's not only perfect for learning to fly, it's a pretty darn nice looking scale airplane.

Once you learn to fly her, you can strap on the option set of floats for landing and taking off from water.

It's available as both a RTF airplane with a DX4e transmitter, and as a Bind and Fly version that can be binded to an DSM compatble transmitter.

Details of the Super Cub can be found here

If you're looking for the cheapest way to get a feel of what it's like to fly an RC airplane, you really can't go wrong with the Mini Super Cub RTF.

It's a very durable 3 channel beginner plane that's ready to fly within minutes of opening the box.

It comes with Hobby Zone's 3 channel FM transmitter that has the same look and feel and a video game system controller.

The included instruction DVD not only explains how to assemble the plane, but also offers some advice and flying tips that will help you through your first few flights.

With only a 31.75" wingspan, this bird can be flown nearly anywhere.

The Hobby Zone Champ is a tiny version of the well known Aeronca with a wing span of only 20.3 inches!

Aside from the size difference which allows the Champ to fly in much smaller areas, the radio equipment is what really sets the Champ apart from the Mini Cub.

The champ comes with a 2.4Ghz DSM2 radio system vs the 72Mhz FM systems of the Mini Cub. There are a couple of distinct advantaged of a 2.4Ghz system.

The biggest advantage is that if you decide to purchase an nicer 2.4GHz DSM2 transmitter in the future, you can easily bind your Champ to it.  This is not possible with an FM system of the Mini Cub.

If you look closely you can see that the FM transmitter of the Mini Cub has an extendable antenna where as the Champ's DSM2 radio has a small rubber ducky antenna.

With the Champ you don't have to worry about bending or not extending the antenna if you go with the Champ.

The Firebird Stratos is the first Hobby Zone RC plane to be powered by two dual propellers.

The Stratos RTF comes with a 2.4 Ghz DSM transmitter. However, it's worth noting that this transmitter ONLY works with the Stratos and can't be binded with other DSM airplanes.

The Hobby Zone Glasair Sportsman is a beautiful licensed 1/8 version of the Glasair. This is the first scale-type plane by Hobby Zone to utilized ailerons.

The ailerons coupled with the same Electronic Virtual Instructor™ technology used with the Stratos makes this an excellent second airplane.

With the help of an experienced pilot this would also make a good first plane.

The Hobby Zone Delta Ray is a delta wing model that utilizes elevons for roll and pitch control and differential thrust between the two propellers to control yaw.

While I would normally never recommend a Delta wing type airplane to a first time pilot, The Beginner mode of Horizon Hobby's new SAFE technology literally makes this airplane as gentle as any trainer. It even has a panic button that returns the plane to stable and level flight with a push of a button.

Once you're comfortable with the basics you can unleash it's full potential by switching to intermediate or advanced mode.

The ready to fly version comes with a same DX4e transmitter.

So what exactly is ACT? Will it really keep you from crashing? Unfortunately there is no such thing as an uncrashable airplane. However, the ACT system will definitely help you avoid many crashes when you're learning to fly. 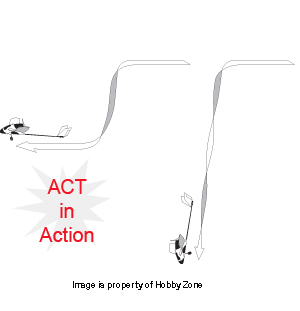 Beginners most often crash when their airplane enters a spiral dive. The infamous "dive of death"! A new pilot often panics and quickly tries to correct the airplane only to make the situation worse by over-controlling.

I learned the hard way that when you get into that situation the best thing to do is to cut the throttle and concentration on getting the wings level. Once the wings are level your bird will begin to fly again rather than spiral to it's death!

The ACT system consists of sensors on both the top and bottom of the airplane. The sensors determine the attitude of the airplane by monitoring the ground and sky.

The system senses when the airplane is in a dive and  quickly kills the throttle and moves the control surfaces in the opposite direction of the dive.

The ACT system quickly transforms a spiraling out of control airplane into a graceful glider in a matter of seconds! Once your bird is flying again the system will hand the controls back over to you.

When you are confident with your flying abilities you can turn the ACT system off with a flip of a switch.

Many of pilots (including me!) have learned to fly with Hobby Zone's V-tail series of airplanes. The V-tail airplanes below all look very similar. Dont let that fool you...

On the surface they all appear the same, but they all have distinct differences.

Unfortunately Hobby Zone no longer makes these V-tailed planes, at least for now.  But you can often find folks still selling them on sites such as Ebay or Amazon. 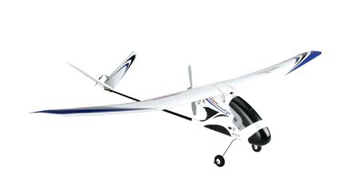 These planes don't actually have a "rudder". The integrated circuit board mixed the signals to allow the elevons to be used as a rudder.

What distinguishes this airplane from the other Hobby Zone RC V-tail airplanes is that there is no elevator control. The throttle is used to control the attitude (up/down) of the airplane. This airplane has a 380 motor, 41" wingspan, includes the ACT system, and has an X-port.

The Firebird Freedom RTF is a 3-channel airplane which enables you to use the elevator to control attitude instead of relying on the throttle. This means you can do loops!

The wing is positioned mid way down the fuselage as opposed to the high wing of the Commander. This makes the Firebird Freedom a little more maneuverable and helps with battling the wind.

Hobby Zones RC Firebird Phantom RTF is basically a miniature version of the Commander except it has 3-channels as opposed to the Commanders 2-channels.

In other words, this little guy has elevator control and also can perform loops. The Phantom comes with a 180 motor and 29.75 wingspan.

This is the only Hobby Zone RC V-tail series airplane that does not come with an X-port. But for the price, you cant beat it!

If you are on a tight budget, this would be a perfect airplane for learning to fly. Personally, Id rather have the Phantom over the Commander any day. Having elevator control is more important than size in my opinion. The Phantom is also significantly cheaper!

The Aerobird is nearly identical to the Phantom with the exception of size. The Aerobird 3 RTF is the third version of the Aerobird series with a 380 motor and 48 wingspan. 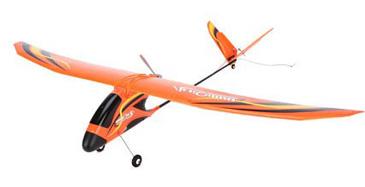 A huge upgrade from earlier versions is that the receivers and servos can removed and used in other 3-channel aircraft. This is not the case with the Firebird series of Hobby Zone RC Airplanes. Both the Aerobird 3 and Aerobird Swift come with X-ports, but neither are equipped with ACT.

The newest addition to the Hobby Zone RC V-tail series is the Aerobird Swift RTF. This is the only V-tail series airplane in the with ailerons.

With a wingspan of 42, the body of the Aerobird Swift is very similar to the Firebird Freedom with the mid level wing and 480 motor.

As with the Aerobird 3, the servos and receiver can also be used in other 3-channel aircraft. What really stands out about the Aerobird Swifts radio is that it is equipped with high and low rates. That means by flipping a switch on the transmitter you can make this airplane very aggressive or very calm.