Have you ever wondered exactly how airplanes fly? How do they seemingly defy the laws of nature by overcoming the powerful force of gravity?

Ever since the Wright Brother plane, people have been mystified by this question. It's natural to see a bird gliding through the sky. But sometimes it's hard to imagine that a huge chunk of metal like the Air Bus can float through the air!

To understand how airplanes fly it is important to have a basic understanding of the laws of physics. 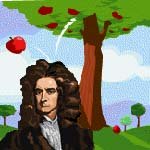 Sir Isaac Newton (1642-1727) was by far one of the greatest scientists in the history of mankind. Although he was long gone before the invention of the airplane, that doesn't mean that he didn't play a key role in inventing the airplane!

There are three simple laws that he discovered that govern the motion of every object in the universe. In order to understand how airplanes fly, we have to start with Newton's three laws of motion.

Don't worry, this is not school, there's no test to pass!

First Law:
An object at rest will stay at rest and an object in motion will stay in motion with the same speed and in the same direction unless acted upon by an unbalanced force.

Second Law:
An object will accelerate when the forces acting upon it are not balanced. The greater the mass of the object being accelerating, the more force it will take to accelerate the object.

Third Law:
For every action there is an equal and opposite reaction.

Forces Acting Upon an Airplane 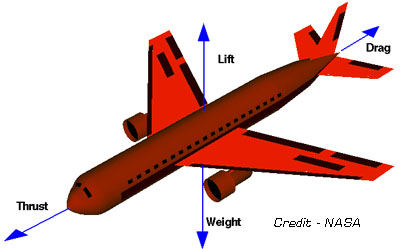 In order to understand how airplanes fly, we need to take a look at all of the forces that are acting on an airplane while it's in the air.

According to Newton's first law, if these forces aren't balanced the airplane will accelerate in the direction of the highest combined force.

A force is basically a push or pull in a specific direction. Pressure acting on an object can be thought of as a bunch of small forces acting over certain area. Force = pressure x area.

There are four forces that are acting on an airplane at any given time. These are lift, weight, drag, and thrust. Refer to the diagram to the right as we learn about each force.

The factors that determine lift are the shape of the airfoil, the surface area of the wing, the angle of attack, and the speed of the airplane.

A Dutch scientist by the name of Daniel Bernoulli (1700 - 1782) discovered that as the speed of a fluid increases, its pressure also decreases. This same principle applies for airflow over an airplane wing. This is known as the Bernoulli's Principal. 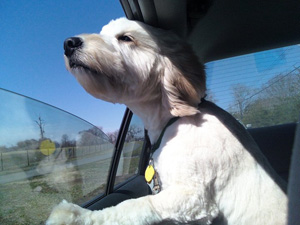 Have you ever been cruising down the expressway with the windows down and all the sudden a loose plastic bag or piece of paper gets sucked out of the window?

Have you ever really stopped to think about why this happens? Well here's why...

But what does this have to do with how airplanes fly you may ask? 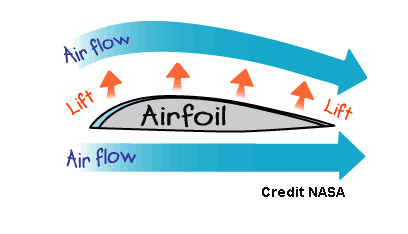 As I'm sure you're well aware, the shortest distance between any two points is a straight line.

The second factor that determines lift is the angle of attack. This is the angle that the wing is tilted upward relative to the flight path of the airplane. 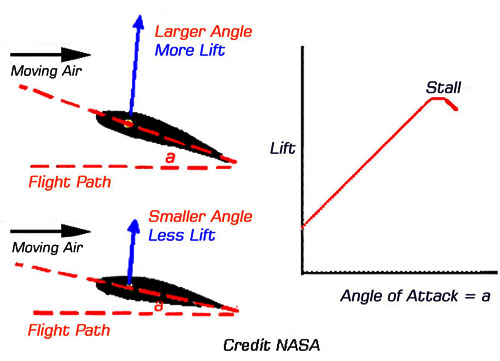 When the front of the wing is raised up, it deflects the air passing by downward. According to Newton's third law, the air must in turn be pushing the wing up. This is lift!

Take a look at the graph above. As the angle of attack increases, so does lift.

But when the angle of attack gets too large, the airplane will stall. A stall means that the airplane is no longer flying, it's falling!

Weight is a force that pulls the airplane straight down. The weight is actually distributed throughout the entire airplane. However, the weight can be thought of as a single force acting on the center of gravity.

The Force of Drag

When an airplane is flying, it encounters air resistance. This air resistance is called drag. Drag can be thought of as a force pulling the airplane's tail backwards.

The shape of the airplane, how fast the plane is moving, and the surface texture all contribute to the magnitude of drag.

In order to get airborne, the airplane must be moving fast enough for the air moving over the wings to produce lift. The force moving the airplane forward is called thrust. Think of thrust as a force pulling the airplane towards its flight direction.

Scroll up and take another look at Newton's first law of motion. Since we are learning how airplanes fly, pay particular attention to the second part of this law.

Pertaining to an airplane, this means that the speed and direction of an airplane will not change unless the forces acting on it are unbalanced.

When the thrust is greater than the drag, the forces acting on the airplane are unbalanced. When this happens, the airplane will begin to accelerate.

Now that you know how airplanes fly, learn how flight control surfaces produce forces to steer airplanes in specific directions while in the air.


Home > How to Fly RC Airplanes > How Airplanes Fly

Back to Top of How Airplanes Fly