RC Frequencies at The Field

Newer 2.4 Ghz radio systems have made it much easier to keep track of RC frequencies at the at the flying field or other event where many planes are being flown at the same time.  In a nut shell, these newer systems do all the work for you by determining what frequencies are in use and avoid them.

Until the most recent explosion in Spread Spectrum technology, all hobby grade RC aircraft transmitters used RC frequencies in the 72 MHz range. The FCC (Federal Communications Commission) regulates all public airwaves in the United States. The FCC has designated the range of frequencies between (72.010 - 72.990)MHz for radio controlled aircraft.

So what exactly is a channel?

Two radio controlled airplanes can not operate on the exact same frequency at the same time. The receivers in both airplanes would be getting signals from both transmitters. That leads to a pile of balsa scraps in a hurry!

For this reason the RC frequencies, designated for RC aircraft, have been divided into 50 designated frequency bands (or slices) within the 72MHz range.

Don't be intimidated by all of these numbers. If you decide to get an FM  transmitter all you have to know is what channel your radio uses. This is simply a two digit number between 11 and 60 and is labeled on the back of your radio.

This can be confusing because each function that a transmitter performs is also called a channel. So the word channel means two different things:

Flying clubs consist of tons of people that are just as excited about flying their airplanes as you are. So how do you know if someone else at the airfield is using the same RC frequency that your airplane uses?

Every club has a frequency board. The frequency board system at each club varies in detail but all accomplish the same thing. A frequency board is a designated place at the flying field where every pilot MUST clearly communicate to everyone what frequency they are using.

At my club there is a board with 50 card holding slots. Every pilot is required to put their AMA card in the slot that corresponds to their frequency (channel). There are also 50 cloths pins numbered 11 - 50. After the pilot leaves his card in the appropriate slot he takes the cloths pin with his channel number and clips it to his transmitter antenna.

Every pilot must check the frequency board before turning on his transmitter. If a card is in the slot for his frequency he knows who it is because this person's name will be on the AMA card. Most everyone is more than happy to take turns using the frequency. 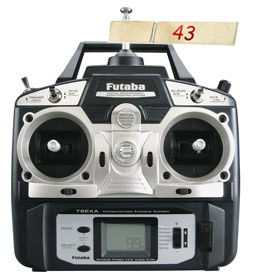 This system has double protection. The pilot MUST have the cloths pin and have his card in the appropriate slot before turning on his radio. If a pilot breaks these rules, even if on accident, and causes another airplane to crash then they are held responsible for the cost of replacing the airplane they destroyed.

Some of the airplanes I've seen at my club probably cost more than my car! So you must ALWAYS follow the frequency board procedure with no exceptions!

Have you bought a radio system only to realize there are 10 other people at your club with the same frequency!

While most pilots are more than happy to share the RC frequencies pin with you, this is still a pain in the butt!

It is much more enjoyable when you don't have to worry about handing the frequency pin back and forth like baton in a relay race. If your transmitter has a plug-in module you are in luck!

It is against FCC regulations (against the law!) to replace the crystal in your transmitter. But it is NOT illegal to replace a plug-in module that contains the crystal. If your radio has an RF plug-in module you can simply pop it out and replace it with a module of a different channel.

If your radio does not have a plug-in module than you would have to send the radio back to the manufacture to have the crystal changed.

Once you've changed the transmitter's crystal all you have to do is replace the receiver's crystal so that both are using the same RC frequencies or channels. Simple right?

Well, it's almost that easy. There are a few things that you need to check before going out and buying a crystal.

Positive-Negative Shift
If you live in North American you need to make sure the transmitter and receiver uses the same "shift". The transmitter could be positive shift or negative shift.

Dual Conversion Receivers
Receivers produce an internal signal that is very close to the frequency coming from the transmitter. When this signal is added to the transmitter signal it produces a much lower frequency signal with the same information.

Lower frequency signals make it possible for the receiver to amplify the signal while eliminating noise when the airplane is far away. This new signal at a lower frequency carrying the same information is called an intermediate frequency (IF). The receiver decodes the information (radio language) from the IF and passes it on to the servos. This is called a single conversion receiver.

Dual conversion receivers came about when the AMA divided the 72 MHz frequency band into 50 channels from what used to be 7 channels. This meant that each channel had to operate in a much smaller frequency range.

Any radio that is being used at a flying field will be a dual conversion receiver or have some means of filtering out interference from the neighboring channel.

High Band/Low Band
Futaba receivers are tuned to the center of either a low band frequency (channel 11 to channel 35) or high band (channel 36 to channel 60). So if you have a low band receiver you are limited to the channels 11-35.

While the PPM radio language is common to all radio brands, each company has its own proprietary "PCM language". The difference is in the way that all those 0's and 1's are magically converted to the binary numbers representing the servo positions.

If you are purchasing a second airplane it is not necessary to buy an entire new radio system. You can simply buy another receiver, crystal, servos, and battery. You can purchase these items together as a package much cheaper than buying them separate. This package is called a "Flight Pack".