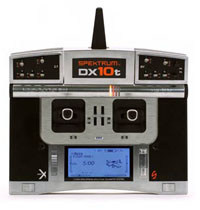 Not only do this technology make sitting up your airplane much easier, they can also make your airplane fly much better by mixing out unwanted flight characteristics.

These systems take all the work out of installing push rods and adjusting throws. With dual and exponential rates you customize the sensitivity of the transmitter sticks to make the airplane responds exactly the way you want it to!

The following are  radio control functions found on the most basic programmable radios.

The ability to choose which way your servos activate allows you to position your control linkages and servo horns which ever way is easiest and most effectively while not worrying about which way they rotate once installed.

Servo reversing is available on some non radio computers as well.  But with computerized radios you can have the direction of the servos customized for several different aircraft using Multiple model memory explained below.

This radio control function allows you to determine how far the servo rotates at its maximum and minimum positions.

It's always good to get the push rods as close as possible to the correct length when installing them. A few clicks on the transmitter to get that final 1/8 is much more convenient than screwing control horns in and out!

This allows you to make minor adjustments to the throws anytime you like without making any physical adjustments on the airplane.

Programmable radios allow you to have two sets of end point adjustments for each function.

With a flip of a switch you can change to high rates to make the airplane much more aggressive for aerobatic maneuvers!

With exponential rates the movement of the control surface is not directly proportional to the transmitters stick movements.

The farther the stick is moved from the neutral position the more the control surface will move relative to the stick motion. In other words, the sensitivity of the stick increases the farther it is moved.

This radio control function allows for more precise control over the airplane for small movements without limiting the throws or end points. 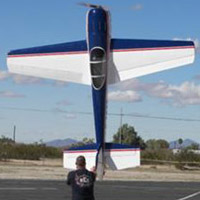 This is good because sometimes you need that extra throw to get yourself out of trouble!

It would be nearly impossible to hover an airplane without exponential rates programmed for the elevator and rudder.

The percentage of expo needed depends entirely on your flying style and taste.

Setting the rate is a trial and error procedure until you feel comfortable with how the airplane flies. Always start with very small percentage of expo and increase it slowly.

The radio control function allows you to have one channel or function to move as a certain percentage of another channel in addition to its own input.

Let's say your airplane has a tendency to dive when making a turn. You could add a mix that increases the elevator position by 3% of the aileron movement.

You still have full control over the elevator, but when you move the aileron stick the elevator raises even more to compensate for the diving characteristic.

Or maybe you have flaps on your airplane that make it want to balloon up when landing due to the extra lift. You can add a mix that decreases the elevator by 3% of the flap movement.

There are endless possibilities of programmable mixes. It's really fun to experiment with these to see how it changes the flight characteristics of your model.

This radio control function is great for tweaking your airplane in the pits when you don't have the frequency pin.

A cable simply connects the transmitter to the receiver. DSC allows you to operate your servos without transmitting a signal.

If the student pilot freaks out or looses control the instructor immediately takes over by letting off of the trainer switch.

The student transmitter is often referred to as a buddy box. A buddy box is not an actual transmitter. It only works in conjunction with a transmitter with the trainer system feature.

Most of us use one transmitter for several different airplanes. Multiple model memory allows you to select which model you want to fly.

It is always good to try to have all of the servos of all of your airplanes going in the same direction if possible. This way if you forget to select the correct model you will still have somewhat control over the airplane even though it may not be what you are comfortable with.