Pattern, Scale, and 3D! Which type is for you?

RC Aerobatics is the art of performing tricks or stunts with your RC airplane. Each trick or stunt is called an aerobatic maneuver. Some basic maneuvers include loops, rolls, or knife-edges. But these are only the tip of the iceberg!

Here you will find a description of the most common maneuvers along with instruction videos and animations. As you might imagine, many RC pilots spend an incredible amount of time perfecting these maneuvers in order to compete with one another.

There are basically two types of RC Aerobatics. There is Precision Aerobatics, also known as Pattern Flying. And then there is the ever-popular 3D flying!

Precision aerobatics requires that a predetermined set of maneuvers be performed flawlessly in front of a set of judges, regardless of wind conditions.

Precision aerobatics is definitely not a spectator sport. As a matter of fact, it may seem kind of boring for the average person to watch. But if you're the pilot, it's the most addicting type of RC aerobatics you'll ever experience. You are constantly striving to do a just a little bit better regardless of your skill level!

Why does it seem boring? Well, mainly because it's the pilots job to make it look boring!

An unfamiliar spectator has no idea how much skill it takes to make the airplane fly each maneuver flawlessly regardless of the speed or direction of the wind.

There are two types of Precision aerobatic competitions. There is Pattern Flying, and there is Scale Aerobatics.

Pattern Flying is a very precise type of precision Aerobatics. It is often compared to ice skating as it's a very graceful type of flying and the judges deduct for imperfections that the average person would never notice.

Pattern planes are specifically designed to fly aerobatic maneuvers perfectly, which is the main difference between pattern flying and Scale Aerobatics.  I'll elaborate more on this in a second...

The only restrictions are that a pattern plane's length and wingspan be less then 2 meters, and the total weight must be less than 11 lbs. These types of RC planes are also referred to as 2-meter planes. 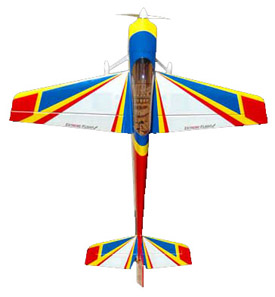 The National Society for Radio Controlled Aerobatics (NSRCA) is a special interest group within the AMA that governs Pattern Flying competition and events in the United States.

Pattern Planes are specifically designed to perform aerobatic maneuvers flawlessly. They really have no limitations other than size and weight.

In contrast, there are many real-life practical limitations involved with designing a full-scale airplane. In other words, a scale model will have all of the bad characteristics of its full-scale counterparts. 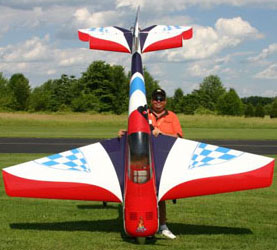 Scale RC Aerobatics puts more emphases on emulating their full-scale counterparts where as Pattern Flying concentrates on perfecting each maneuver with more precision and accuracy than any full-scale airplane could possibly achieve.

Although its part of the AMA, IMAC is recognized in many countries across the world. Don't get IMAC confused with the IMAA, which is an AMA special interest group dedicated to Giant Scale RC airplanes!

Trust me, all these Acronyms can confuse the heck out of you if you're new to the hobby.

IMAC is also referred to as the Mini-IAC, where IAC is the International Aerobatic Club for full-scale aerobatic competition.

If you've never seen a full-scale IAC competition, you've got to put that on your list of things to do. Even if its just watching in on television, it's really awesome to see!

3D RC aerobatics is a relatively new type of RC aerobatics. 3D airplanes have a very high thrust to weight ratio which allows them to pretty my hover like a helicopter would.

When the plane is actually being kept in the air from the thrust of the prop, and is not actually flying from the lift of its wings, it is considered a high alpha maneuver, meaning high angle of attack.

It's really impressive to watch a skilled 3D pilot in action, and it's much harder than it looks! 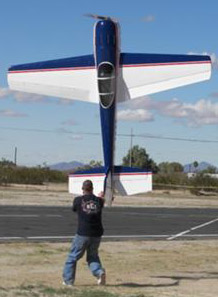 Getting an airplane to hover is a lot like trying to balance a pencil on the end of your finger. It's very unstable and takes constant rudder, elevator, and aileron corrections to keep steady.

3D aerobatics is a growing aspect of the hobby that some pilots love, and quite frankly others hate!

It definitely takes a skilled set of thumbs and tons of practice (and broken planes) to pull off some of these insanely crazy maneuvers, thats for sure!

Ok, I guess its hard to believe that any true RC fanatic would hate any type of RC airplane. But there is a lot of friendly and kindhearted bickering back and forth between some of the dedicated precision aerobatic pilots and hardcore 3D guys.

Many pilots do both and everyone respects the fact that both types of flying take an enormous amount of talent.

3D RC aerobatics really doesn't have a home of its own so to speak. Most IMAC competitions tack on a 4 minute free style event after all the precision flying is complete.

But its more or less an after thought after the main attraction so to speak.

The International Extreme Flight Championships, sponsored by Futaba, is one of the few events that is dedicated to 3D competition.