Learning the fundamental RC airplane controls is obviously pretty important for beginner pilots.  You need to know which sticks to move for controlling the throttle, elevator, rudder, and ailerons.

But first, we need to get the idea of a "channel" ironed out since it actually has a couple of different meanings. Generally speaking, each function of an airplane requires one channel. For example, a typical 4 channel airplane will have throttle, ailerons, elevator, and rudder control.

It's important not to get "function" channels confused with "frequency." channels. The number designated to the frequency of a 72Mhz transmitter is also called a channel.

The most basic airplane, with no ailerons, needs a 3-channel radio in order to control the throttle, rudder, and elevator.

Most often, the pitch and turning is controlled by the same stick regardless of whether you are using a 3 or 4 channel radio system.

A 3-channel radio will have the elevator and rudder(or ailerons) on the right stick and throttle on the left stick. The left stick is replaced with a slider to control the throttle on some radios.

Ailerons really bring an airplane to life because they allow the airplane to roll. Most everyone that is serious about this hobby flies planes with ailerons. For this reason I want to focus our discussion of RC airplane controls on four channel radios.

A radio with four or more channels will have elevator/aileron control on the right stick and throttle/rudder control on the left stick. The ailerons are the primary turning control for an airplane with ailerons. 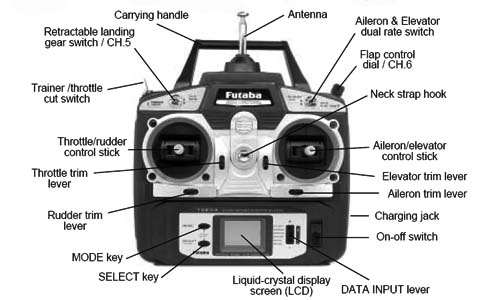 The radio above is a 6-channel radio. I have this radio. It takes four channels to fly the plane, which leaves two channels open for using flaps, retractable landing gear, or anything that requires a servo.

Keep a close eye on the ailerons (highlighted yellow). When the position of the ailerons change the airplane will roll.

Notice that the stick appears to be moving in the opposite direction of the roll. This is because the airplane is coming towards you, so it looks backwards. This is called control reversal.

Training your brain to think backward to move the RC airplane controls in the correct directions when the airplane is coming towards you is the single most challenging aspect of learning to fly RC airplanes. This becomes second nature with time.

If your airplane has an engine then moving the left stick forward or backwards moves a servo that is connected to the engine's carburetor.

The flaps are generally controlled by a knob near the top of the transmitter. The flap control is proportional. The distance the flaps move is directly proportional to how much you turn the knob.

These miscellaneous RC airplane controls can be switched around to various switches and knobs by plugging the servos into different slots of the receiver.

More pages to help you get started Flying RC