No more worrying about interference from your engine, motor, or ESC's! The kid down the street from the club can't shoot you down while flying his electric parkflyer!

In addition to the freedom from interference, these systems have a much faster response to make you feel connected with your model airplane. Your RC airplane responds instantly to your commands!

These radio systems use less power which means extended flight times and longer battery life. On top of all that we finally get rid of those annoying extendable antennas that often get bent and occasionally forget to be extended!

What Exactly IS Spread Spectrum?

The most primitive form of spread spectrum technology was developed during WW2 for encrypting signals that controlled torpedoes without the enemy detecting or jamming the signals. Today this technology is used in just about every aspect of military communications. This is the most secure radio link that has ever existed.

This technology allows a transmitter and receiver to be “mated” so that the receiver only listens to that particular transmitter. There are two ways of achieving this. The two methods are Direct Sequence Spread Spectrum (DSSS), and Frequency Hopping Spread Spectrum (FHSS).

DSSS systems transmit on a single selected frequency with a much wider bandwidth than the original data signal. The original narrow band data signal is sent through a “spreading code generator” within the transmitter.

The spreading code generator multiplies the original narrow band data signal buy a much higher frequency. The spreading code generator also multiplies the signal by a coding scheme which is unique to each radio. This coding scheme could be as simple as multiplying the signal by 1 or -1 in a systematic way that appears to be random.

The 2.4 GH transmission will appear to be random white noise for any receiver other than the mated receiver. The mated receiver picks up this “noise” signal. From the mating process the receiver knows the coding scheme used by the transmitter. It uses this to reconstruct the signal back to its original form.

Spektrum is the industry's leader in designing and manufacturing 2.4GHz radio systems for RC aircraft. The first such system was available only for park flyers. When developing this system Spektrum developed a proprietary coding scheme called Digital Spectrum Modulation (DSM).

Spectrum utilized DSM technology to develop the DX6 radio system which was the first spread spectrum radio system designed for aircraft use.

Larger airplanes fly faster and farther and have more internal parts that will block the radio signal. The DX6 system was designed specifically for park flyers and will not work with larger airplanes.

The term DSM is often mistakenly used to refer to all spread spectrum radio systems for RC aircraft. While this used to be the case, Futaba now has 2.4Ghz radio systems available that uses their own technology.

With an FHSS system the transmitter utilizes a narrow band frequency within the 2.4 GHz range. It continuously changes its frequency several times a second. From the mating process the receiver knows the code or pattern of frequencies that the transmitter will utilize. It then listens on the appropriate frequency as the transmitter changes from one frequency to the next.

, which can be uses with both park flyers and larger airplanes.

Because the wavelength of the 2.4 GHz frequency is so small it can't go  around objects very well. The 2.4 GHz signal can be easily blocked by metal objects on the airplane such as the engine or landing gear. A second receiver is added to the system so that at least one of the receivers will have a clear unblocked signal from the transmitter.

Spectrum's systems use their proprietary DuaLink technology. With this system the transmitter transmits on two different frequencies simultaneously. Each receiver receives the same information on each of their respective frequencies. If one receiver's signal is blocked or corrupted the second receiver will take over.

The main receiver resembles a standard 72Mhz receiver and is installed in the same manner. The second receiver is a satellite receiver connected to the main receiver via an umbilical cord. The two receivers need to be mounted at least 2" apart and preferably 3-4 inches apart. It is important to mount the antennas pointing 90 degrees from one another so that one of them is always receiving a signal at any given time. The satellite receivers are typically mounted to a former in the fuselage where it is easily accessible. This is much easier than running a standard 72Mhz antenna wire!

Futaba's systems don't actually have two receivers. Futaba uses their Dual Antenna Diversity (DAD) technology. If the signal is blocked coming into one antenna the receiver will quickly switch to the other antenna and will use the strongest of the two signals. These two antennas need to be pointed 130 degrees from one another. Follow the manufactures directions when installing the receivers.

for a variety of radio brands including Futaba. That's right, you can get a Spektrum module for your Futaba radio system. Don't be mislead by the picture, these modules do come with antennas!

I touched on some of the most obvious benefits of 2.4GHz radio systems, lets go a little deeper...

Without a doubt the most obvious, if not the greatest, advantage of using SS radio systems is that multiple users can use the same 2.4 GHz frequency band.

When a spread spectrum transmitter is turned on it immediately searches the 2.4 GHz frequency band for an open channel BEFORE transmitting. This means you never have to worry about checking the frequency board before turning on your transmitter. You can use your radio in the pits when tweaking your airplane without worrying about having the frequency pin or shooting someone down!

Spread spectrum 2.4GHz radios and standard FM 72Mhz will not interfere with one another due to such a large difference in the frequency magnitude. When at the flying field you can feel free to turn on your SS radio at any time without fear of shooting someone down.

The 2.4 GHz frequency range is beyond the range of noise generated by motors, ESCs, metal to metal contacts, and vibrations that cause glitching and interference with standard 72Mhz radios. In fact, spread spectrum technology virtually eliminates ALL radio interference! 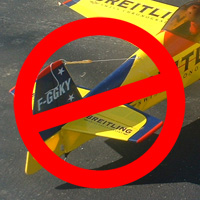 The wavelength of the signals in the 2.4Ghz range are much shorter than those of the 72Mhz range. This means that both the transmitter and receiver's antennas are much shorter. This is why spread spectrum radios have antennas similar to a cordless phone.

The short antennas eliminate the headaches associated with routing the transmitter antenna through the airplane. A spread spectrum receiver antenna can most always be contained within the airplane where it can't be seen from the outside.

Another great advantage of 2.4Ghz systems is that you no longer have to worry about forgetting to extend your Tx antenna. This may sound like a no brainer, but I'll have to admit I've forgotten to extend my antenna on more than one occasion...

If you're clumsy like me, it's really nice not having to worry about bending your transmitter antenna...

2.4 GHz receiver uses a special kind of antenna called a dipole antenna. It is more than a simple wire used in conventional radio receivers. It is important to know that you can not cut or splice these antennas like you can a standard 72Mhz antenna! If the antenna is damaged do not fly your airplane. Send the receiver back to the manufacture to be repaired.

Latency is the time it takes your airplane to respond after you move the transmitter sticks. One of the factors that determines latency is how fast the signal gets from the transmitter to the servos. The other factors are the servo response times, load on the control surfaces etc.

Because 2.4GHz radio systems are completely digital, the latency time is much less. The airplane responds almost instantly to your inputs! You may not notice it with normal Sunday flying. But you will notice it while doing aerobatic maneuvers that require timing such as rolling circles.

2.4Ghz radio systems use less current to operate than standard 72Mhz systems. This results in longer flight time and longer life of your transmitter and receiver batteries.

For extra torque and redundancy, two servos are often used to operate one control surface. The pulses going to each of these two servos from a tradition radio receiver are not perfectly in sync. One servo will lag as it receives the pulse a split second after the first servo.

Spektrum's DX7 radio system has a patent-pending feature known as ServoSync. This feature allows these servos to be programmed to receive their pulses simultaneously eliminating any binding or lag between the two servos. This subtle enhancement makes a huge difference to the response of the aircraft allowing the pilot to feel more connected to the aircraft.

Many pilots use the same transmitter to control multiple aircraft. These aircraft may have the servos reversed, different end point adjustments, trims etc. Many crashes have been caused by pilots forgetting to select the correct model on the transmitter. This will never happen again with Spectrum's ModelMatch.

ModelMatch is another patent-pending feature available with Spektrum's DX7 radio system. This system allows the transmitter to recognize which model aircraft it is controlling. If the correct model is not selected then the aircraft will not respond. This feature alone could very easily pay for the entire system by preventing a devastating crash!

More information about RC radios to sink your teeth into...