There's a big difference between actual RC Gas Engines and glow engines used in our hobby.

While nitro or glow powered engines are the best choice for smaller sized planes, I'll explain why it makes more sense to use gasoline engines to power larger RC airplanes.

There are many things to consider such as the added complexity, cost, and weight of an ignition system. Generally when your airplane is around 10 lbs or larger it becomes more economical to use a gasoline engine due to the cost of fuel.

Are you on the fence between which type of engine to use? Let’s talk about some of the additional components and characteristics that true RC gas engines have that make them different from glow engines.

Gas engines use spark plugs whereas nitro engines use glow plugs to ignite the fuel/air mixture. For this reason RC gas engines require on-board ignition systems which provide electricity to the spark plug at precisely the correct time.

This added weight and complexity to your airplane need to be taken into consideration. There are two types of electronic ignition systems used with gas engines.

The first type is a magneto. A magneto uses magnets attached to the rotating engine to create electrical pulses for the spark plug at precisely the right time. This eliminates the need for an on board battery. 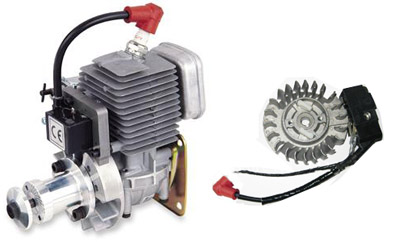 Your weed-wacker or push mower uses a magneto to fire the spark plug. Magnetos are very reliable but also add weight to the engine.

Since the magneto doesn’t produce electric for the spark plug unless the engine is turning, an engine with a magneto ignition system must be started with an electric starter just as a nitro engine does.

Most RC gas engines available today use an electronic ignition system. This system uses a separate battery to provide electricity to the spark plug. This allows the engine to be hand started. 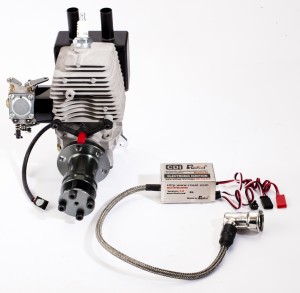 The timing of the spark is critical for maximizing the power from any engine. As the speed of the engine changes, the precise time that the spark plug should fire for optimal performance (in relation to the piston’s position) changes. An electronic ignition system accounts for this and adjusts the timing depending on the engine’s RPM’s.

It takes a slightly larger gas engine to produce the same amount of power as a nitro powered engine. This is because the methanol/air mixture produces more energy than gasoline/air mixture during combustion.  So you’re adding more weight to your plane for the same power.

However, a gas engine only consumes about half as much fuel as a nitro powered engine. Combine that with the fact that nitro fuel costs roughly three times more per gallon than gasoline and you can quickly see why most large scale airplanes are gas powered RC airplanes!

RC gas engines have built-in fuel pumps. For this reason, it is not necessary to hook a vent line to the exhaust as is required for a nitro engine. With an RC gas engine you have the freedom to move the fuel tank anywhere you want within the fuselage.

The same fuel tanks designed for nitro engines can be used. However, the fuel lines must be designed specifically for gasoline. Nitro tubing will dissolve when exposed to gasoline.

A nitro engine utilizes methane in the fuel as a coolant. When the fuel is pulled into the carburetor, the methanol vaporizes. It requires a significant amount of energy to vaporize the methanol.

This energy comes from pulling heat from the engine. This is why gasoline engines require more air across the cooling fins than nitro engines.

If you go with gasoline engine you’re probably going to have to add more holes in the cowling for cooling the engine than you would have to with a glow engine.

Gas engine ignition systems are known for causing radio interference. As a general rule, the ignition system should be around 12 inches away from the receiver. Metal pushrods should not be used for the throttle.

Pros and Cons of Gasoline Engines

True gas RC engines have a lower power to weight ratio, require an ignition system to power the spark plug, and are generally more difficult to operate compared with a glow engines.  But the cost of fuel is much cheaper.

It doesn’t make much sense (and many times not even feasible) to install such a complex and heavy power plant on a small to mid-sized airplane. The added complexity and weight of RC gas engines becomes a worthwhile trade-off for more affordable fuel when your flying a larger heavier airplane.

And if you have a giant scale RC airplane, you don't have much of a choice because glow engines are only made so big!