RC glow plugs are literally the heartbeat of your glow engine.  Understanding a few basics fundamentals goes a long way in keeping your engine purring and your plane in the sky at the flying field!

More specifically, it's important to understand how they work and why they're totally different from the spark plug in your car. You need to know the difference between hot plugs and glow plugs so you can choose the correct one for your engine. I'll also share a few tips that will hopefully save you some time and trouble. 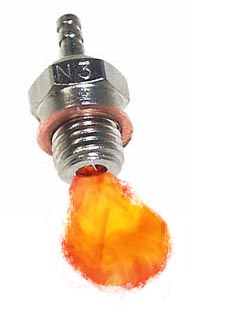 RC glow plugs provide the ignition for the fuel/air mixture in the combustion chamber of the cylinder.

In another words, it provides the heat that causes the mixture to explode. The gasoline engine in your automobile uses a spark plug to initialize the explosion of the fuel/air mixture.

RC glow plugs for a nitro-powered engines and spark plugs for gasoline engines serve the same purpose of igniting the fuel/air mixture. The mechanics of how they accomplish this are completely different. 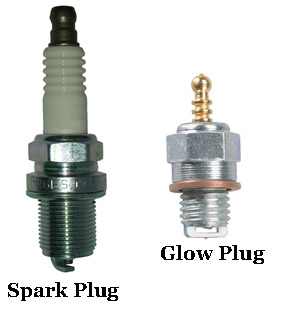 An RC glow plug has a coil constructed from platinum. When starting the nitro-powered engine an electrical charge of 1.5 volts must be applied to the RC glow plug.

When the charge is applied, the coil of the glow plug begins to glow just like the cigarette lighter in your car console. The engine will fire when the temperature in the combustion chamber reaches the fuel mixtures ignition point.

As the engine is manually turned over, the pressure in the combustion chamber increase as the cylinder approaches top dead center. As the pressure of the mixture increases, its temperature also increases.

The heat from the RC glow plugs coil along with the heat from compressing the air in the cylinder raises the temperature to the ignition point causing the engine to fire.

Now for the great mystery! What keeps the coils hot once the battery is removed from the glow plug?

The methanol portion of the glow fuel reacts with the platinum coil of the glow plug causing it to glow. This is called a catalytic reaction.

The pressure in the cylinder acts as a catalyst for this chemical reaction between the methane and platinum. The higher the pressure the greater this reaction will be, causing the glow plug to become hotter.

For the engine to run properly, the glow plug must produce enough heat to cause the mixture to reach its ignition point just as the piston is approaching top dead center (TCD).

To optimize the performance and power of your engine, the mixture must fire at exactly the correct time. Not too soon, and not to late!

To control the timing of your engine, you must have the correct RC glow plug that corresponds to the methanol content in your fuel.

If your fuel has a higher methanol concentration (less oil and nitro), you will want a glow plug that will react less to the methane during the catalytic reaction in order to have the coils of the plug to produce the necessary heat to reach ignition temperature at the correct time.

Plugs that react less to the methanol are called hot plugs. Cold plugs react more with the methanol causing the plug to get hotter more quickly.

Every glow plug manufacturer produces a range of plugs from hot to cold. The way the companies name these different types of plugs makes no sense to me.

On top of that, each manufacturer has a different way of naming their plugs. It's not that complicated as long as you don't try to make sense of why they call them what they do.

Just know where each plug falls in the range between hot and cold. I recommend sticking with the type of plug that comes with the engine. The important thing to know is that every RC glow plug is different and you need to have the right one for your engine.

If you have no idea what plug to use, an O.S.#8 RC glow plugs

work well with most airplane engines and would be a good starting point.

If the engine speed decreases significantly when the glow driver is removed you may have a bad glow plug or the engine may be a bit lean.

If you are absolutely sure the glow plug is good and the engine's tuned properly, you may want to switch to a hotter plug or switch to a fuel with more nitro (less methanol).

If the coils of the glow plug continuously fail or break over and over then you may consider changing to a colder plug.

If the engine seems to backfire constantly, you may want to change to a cooler plug or switch to a fuel with less nitro (more methanol).

Again, unless you have a legitimate reason, stick with the glow plug that comes with the engine.

Some glow plugs have a little bar that protrudes over the coil of the glow plug. The bar resembles the electrode ground of a spark plug. 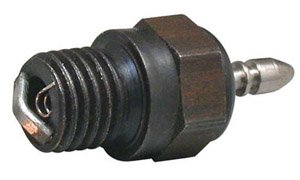 The purpose of this bar is to protect the coil from getting doused with unburned fuel which can be a problem when the engine is at idle. The bar itself is metal and retains heat which helps keep the engine idle smoothly.

Idle-bar plugs do come in handy for engines that are mounted inverted. When an engine is upside down there is an increased chance of having unburned fluid contact the glow plug.

Also be sure that your engine is made to accept an idle-bar glow plug. You don't want the piston to hit the idle-bar!

When to Replace the Glow Plug

Leaving the igniter on the RC glow plug too long will damage it. If the coils do not glow, you obviously need to replace the plug.

As I mentioned above, if the engine speed decreases significantly when the glow driver is removed, you may have a bad glow plug.

Another sign of a bad glow plug is if you just cant seem to get the low speed idle tuned correctly. If the engine is not transitioning from idle to full speed smoothly no matter how much you adjust the carburetor, you probably need to replace your glow plug.

Tips that save you some trouble...