Having a good understanding of RC airplane fuel goes a long way when it comes to keeping your engine running reliably at the flying field.

Let’s face it, it’s absolutely no fun spending the day trying to get your engine to run correctly while everyone else is flying. And this hobby is expensive enough without ruining your engine because you’ve used the wrong oil or nitro content… 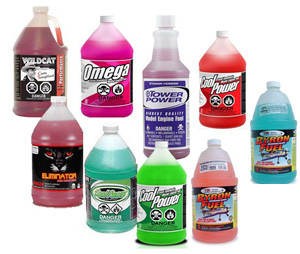 Nitromethane makes up anywhere from 0 to 15% of the fuel we use in our glow engines. Yet, we called it “RC nitro fuel”.

The bulk of RC nitro glow fuel consists of Methanol.   But you have to admit, “nitro fuel” sounds a lot cooler than “methanol fuel” don’t you think?

The third ingredient in RC airplane fuel is oil, whether it be synthetic or castor.

Lets talk a little bit about what each ingredient does so that you will have a better handle on choosing the correct fuel for your engine.

Methanol is a form of alcohol. What makes methanol special is that it reacts chemically with the platinum filament of your engine’s glow plug to keep the plug hot once you remove the glow plug.

If you’re not familiar with this process, take a second to read up on glow plugs before continuing.

And obviously, methanol is what provides the energy in the fuel as it is the primary combustible ingredient.

Just like a chainsaw or weed eater, our two stroke and four stroke glow engines require lubrication.  Not only does the oil keep all the moving parts lubricated, it also helps to remove heat from the engine...

On average, most of us use fuel with around 15% to 20% oil content. This can be castor oil, synthetic oil, or a mixture of both.

is a naturally occurring lubricant that’s made from castor beans. It does a great job of lubricating the engine at both high and low temperature ranges as it forms a lubricating film when it breaks down.

Castor oil also provides better protection for your engine should you accidentally run it a little on the lean side.

The problem with castor oil is that all of this lubricating film ultimately comes out the exhaust sliming your entire airplane, kind of like Ghost Busters.

Synthetic oil does a great job at low temperatures and it doesn’t slime your airplane!

The drawback is that synthetic oil is not as effective at higher temperatures and does not offer any protection for an accidental lean run of your engine.

For this reason, many fuels contain of blend of both castor and synthetic oil. This way you minimize the messy discharge of the exhaust while keeping your engine well lubricated at all temperatures.

Now on to the cool part, Nitromethane! We can all agree that it sounds cool, but what does it actually do?

Nitromethane requires less oxygen to burn compared with other fuels.  This means we can use that extra space in the combustion chamber to pack more fuel instead of air.

Don't get too carried away because this also means more heat.  An engine can only dissipates so much heat before she starts to melt down. This is way it is critical that you do not exceed the recommended nitro content for your engine.

Typically RC airplane fuel contains around 5%-15% nitro. Some engines that are designed built specifically for racing can run with a larger percentage of nitro.

When breaking in ringed engine you may want to consider using only 5% or less nitro to keep the heat minimized.

The methanol in RC airplane fuel naturally attracts water, so it's important that you keep your fuel container airtight.

Make sure the lid is on tight. If you have fuel fittings in the cap of your fuel container then make sure you replace this cap with a solid airtight cap when storing your fuel.

Fuel containers that are half empty are more vulnerable to getting contaminated with water, especially if you live where it is very humid. When your fuel container is half empty you may want to consider finding a smaller container to store it in if it is going to be a while before you fly again.

Storing your fuel in direct sunlight should also be avoided because the ultraviolet rays could break down the fuel.

Keep in mind that you may have water in your fuel although it may look perfectly fine.

One day I spent hours tweaking, tuning, and cussing because my engine just would not run right. One of the guys at the club recommended I try a tank of his fuel. Low and behold my engine ran perfect!

It is common for fuel to go bad if not stored properly. If your engine is giving you fits try borrowing a tank of your buddy’s fuel. You may keep your sanity!