Following a proper nitro engine break in procedure is essential for getting the maximum power, performance, and life from your new engine. Always follow the break-in instructions that come with your glow engine’s manual.

And they all change differently because of the different materials and distribution of heat.

All of these “distorted” parts that move against one another must be “mated” or  “worn together” so they fit together perfectly at normal operating temperature.

The break in procedure for ringed engines is entirely differently than that for ABC engines. If you’re not sure of the difference, it’s explained in detail here.

If you don’t want to mess with breaking in your glow engine, you can pick up an Evolution Engine this is broken in for you at the factory. 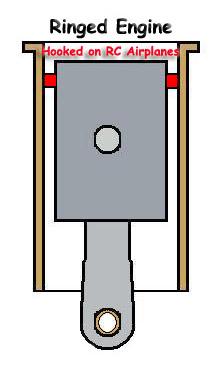 With a ringed engine, the object is to run your engine at a very rich fuel setting with a reduced load for short periods of time, maybe 30 seconds for the first run.

A propeller one inch smaller in diameter than the propeller you plan to fly your RC airplane with should be used to reduce the load on your new engine during this process.

Your RC plane engine needs time to cool to ambient temperature after each run. Each run will be a little longer with the high speed needle valve adjusted a little leaner each time.

After breaking in your ringed glow engine on the “ground”, it will require approximately 20 flights at very rich fuel setting before the high speed needle valve can be adjusted for optimal power.

The manual may tell you to adjust the high speed need valve until your RC engine is on the verge of “four stroking”.

Because a 4-stroke engine only fires on every other stroke, “four stroking” is a common term that refers to a 2-stroke engine that is running so rich that it is not firing on every rotation making it sound like a four stroke.

It may be necessary to leave the glow igniter clipped to the glow plug in order to keep the engine running in this “four stroking” mode. 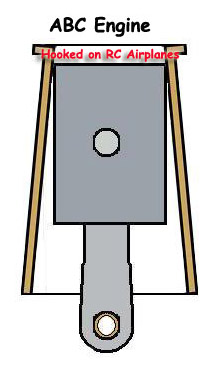 The nitro engine break in procedure for an ABC engine requires getting your engine up to operating temperature as quickly as possible. Note that this is the opposite of the ringed engine break-in procedure.

To understand why this is necessary, it’s absolutely necessary to understand how an ABC engine is constructed.

The top of the cylinder near the glow plug will naturally becomes hotter than the bottom because this is where the “explosions” takes place right?  As the engine heats up, the brass liner will begin to expand faster than the piston.

For this reason the piston and sleeve are sized so that they fit properly when the engine is at operating temperature.  When the engine is cold the liner has a much smaller diameter at the top of the stroke.

You might notice that the piston seems to “stick” at the top of the stroke when it’s cold.  You may even have to heat the engine with a heat gun before starting it for the first time.

If the engine is ran too cool (or too rich), the piston will wear to fit the brass liner at this cool temperature. When the engine heats up to operating temperature there will be a gap between the sleeve and cylinder.  Obviously this is no good as you would  have constant trouble keeping the engine running.

On the same token, it is important not to run the engine too hot (or too lean) during the nitro engine break in period. Breaking in an ABC engine too hot will cause the sleeve to expand more than the piston which also creates gaps which could allow gases to blow by the piston.

Again, it is important to follow the nitro engine break in procedure outlined in the user manual that comes with your RC airplane engine. Either way, it typically takes about 10 flights before you can lean the engine out to optimal power, which is about half the time needed to fully break in a ringed engine.