A discus launch glider is a heck of a lot easier to get into the air than a traditional hand a launched glider (HDL) which requires a physically demanding over-arm javelin style throw. In other words, you don't have to be Iron Man in order to have a  decent launch in competitions.

Lets face it, many of us folks that enjoy hand launching our gliders are not exactly physically fit.  And some of us are getting up in age...Even if we do manage to get the model into a thermal, we end up paying for it over the next couple of days with sore muscles and stiff backs!

A DLG can be launched much higher with much less energy exertion. More emphasis is placed on form rather than strength when launching this type of glider.

This is very similar to how a track and field discuss is launched.  Thus the name "discus launch" glider...

Withstanding the Forces of Launch

DLG on the Left, Thermal Glider on the Right

Gliders built for thermal soaring are of very light construction. In fact, they have to be built so light that they can literally float a top a rising column of air.

The structures of original HLGs (including thermal gliders) were built to withstand the normal forces of flight. But they were NOT designed for the tremendous side loads exerted on the wing during a discus launch.

This is why you won't see too many DLGs constructed from built up balsa and spruce like you see with conventional HLGs.  As a matter of fact, most discus launched gliders are constructed from either some type of foam of fiber material.

The booms of DLG are generally a little beefier to keep them from flexing during launch. Through testing and experimenting, other subtle changes have been incorporated into the designs of discus launch gliders to help them track nice and straight after being launched discus style.

High end discus launch gliders designed for competition can cost several hundred dollars or more. Competitors are willing to spend the extra cash to gain every advantage possible over the competition. The average modeler doesn't need to speed a small fortune on a decent DLG. 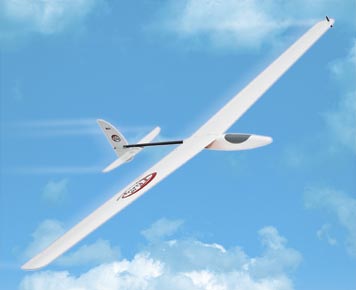 The Great Planes Fling has introduced a many of pilots to the world of DLG. What makes it so popular is that it's a quality Great Planes product at a very modest price that won't put the average modeler in the poor house.

Another selling point is that it only takes around 2-3 hours to get the it assembled and ready to fly. Its fiberglass and carbon-fiber construction keep this glider very light making it easier to find and ride those thermals.