When the wind is driving directly into a ridge or hill, it really has no place to go but up.  Slope gliders harness the energy of the rising air to stay afloat. 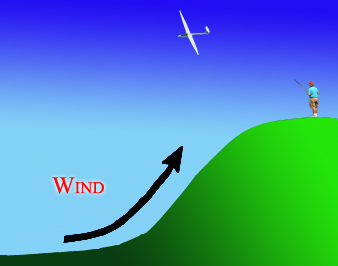 The next time you're out on a Sunday drive, take a look at the birds gliding around the sky effortlessly along the side of a ridge.

We actually stole the idea from them!

Ideally, you want to have the wind blowing directly into the ridge. An angle of more than 30 degrees between the wind direction and the face of the hill will not produce enough lift for your slope glider.

The wind speed and direction along with the shape and size of the hill determines how much lift is produced. The right slope with pefect conditions can have updrafts of several hundred feet from the top of the ridge!

If you're just starting out in the hobby, you'll first need to get comfortable with the controls of your glider. It takes some time to get the hang of the control inputs, orientation, and basic overall control of the glider.

Learning the sticks is much easier with slope soaring than other types of soaring. The flight times are much longer and the lift is much stronger and more uniform than lets say thermal soaring.  This gives you more time to focus on controlling your glider rather than searching for thermals to keep your bird aloft.

Another advantage to the beginner is the fact that slope soaring doesn't require any type of launching equipment.

When it comes to slope gliding, there is no "one size fits all" model to recommend.

Think about the type of gliding you would like to pursue. Do you want a fast glider? Rather have a floater? What are the lift conditions? Do you a perfect slope with tons of wind and lift? Does your flying site have mediocre lift?

Once you answer these questions you will be in a much better position to choose a slope glider suitable for you by understanding the following basics principles.

If you're new to RC, you literally can't go wrong with the Carl Goldberg Gentle Lady. This is a two channel elevator-rudder floater that has been introducing new folks to the hobby since the 1970's!

Since Great Planes purchased Carl Goldberg, it's now the "Great Planes Goldberg Gentle Lady." This is a very easy build, even if you have no prior building experience.

The Gently Lady is very SLOW and doesn't require a lot of lift. It all actuality it makes a better thermal soarer than a slope glider because it can't handle too much wind. But it's absolutely perfect for a beginner to learn slope soaring in a light breeze.

Ebay has a Wide Variety of Gliders

Again, consider what type of gliding you would like to do along with the typical wind conditions at your flying area.