The Sukhoi Su-26m BNF was the first of the ultra micro series of airplanes. Here is a quick review of mine!

Ive been waiting anxiously for ParkZone to release this miniature aerobat ever since I saw it on display at the Toledo Show back in April. Apparently me and everyone else were eagerly anticipating the release because ParkZone cant seem to make them fast enough. These things are selling like hot cakes!

Out of the Box

This is what the Parkzone Sukhoi Su-26 BNF looked like when it arrived at my door step. Nice neat box with everything packaged nicely. I felt like a kid on Christmas morning...

The owner's manual was in the box packaged it it's own plastic bag. The landing gear and extra prop has it's own baggy. The battery and charger were packed snuggly in their place in the packaging foam.

The landing gear was the only part of the airplane that I had to install. There wasn't much to it. It just snapped into place...

Four AA batteries are included for the DC single-cell charger that's included with the Sukhoi Su-26m. The single-cell LiPo battery just snaps into the slot of the charger and the red LED stays lit until the battery is charged. Pretty straight forward... 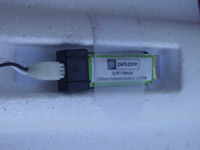 You'll notice in the far right picture that there is a fairly wide slot on the underside of the airplane for the battery. This is over sized to allow you to adjust the battery position to tweak the center of gravity.

The manual states that the CG of the ParkZone Sukhoi Su-26m should be between 29mm and 31mm from the leading edge of the wing at the fuselage, which is exactly what I measured it to be with the battery postioned at the very back of the slot with the landing gear and stock propeller installed.

There is a strip of Velcro that holds the battery into place. I felt a little more secure by placing a small piece of Scotch tape over the battery.

How long does it take for the ParkZone Sukhoi Su-26m BNF battery to charge? Not long at all! The manual say 40 minutes for a completely discharged battery, and 20 minutes for new batteries. After a full flight, it takes my batteries between 30-35 minutes to charge. I bought a couple extra batteries since they are so cheap, only about 10 bucks a piece.

What's the average flight time of the Sukhoi Su-26m BNF? I have been getting about 6 minutes at nearly full throttle before I notice the airplane begin to act sluggish. The ESC low voltage cutoff (LVC) starts cutting the motor at around 6 minutes and 30 seconds. Now that I know the limit, I set the timer for 6 minutes to avoid reaching the LVC so I won't damage the battery.

Since my blade 400 came already binded to my Spektrum DX6i transmitter, this was my first time at binding a Spektrum receiver to my transmitter. I am still using my trusty 72Mhz transmitter on all my other RC airplanes.

I was kind of taken back at how easy it was. All I had to do is plug the battery into the airplane while looking into the nose of the plane until the red light started blinking. I held the trainer switch on the transmitter while turning it on. Peace of cake. Its all ready to fly!

In order to increase the throw of the ailerons, you have to take the Parkzone Sukhoi Su-26m BNF apart. Personally, I thought it flew just fine with the stock settings. But I am the type of person that loves to take things apart to see how they work.

It was very simply. I just peeled back Scotch tape on the rear and pulled back the front decal and the top came right off. Its just as simple to put it back.

The Spektrum AR6400 6-channel Ultra-Micro Receiver is immediately revealed once the top is removed. This â€œbrickâ€ consists of a Spectrum receiver, two linear servos, a place to plug in additional servos, and an X-port. When the receiver and servos are made together on a single circuit board like this, itâ€™s commonly refered to as a â€œbrickâ€.

Iâ€™m not exactly sure why you would need an X-port for an aircraft this tiny. But if you can think of a use for it, itâ€™s there. Itâ€™s pretty amazing how much functionality the tiny lightweight AR6400 has.

Although it has debuted with the ParkZone Sukhoi Su-26m, your likely to see it used in many small airplanes in the future. Even though the Sukhoi Su-26m uses a brushed motor, the AR6400 has the ability power a brushless motor. Just have to make sure you know what youâ€™re doing as a brushless motor plugs into the receiver plug a bit differently.

Actually I waited until after the first flight to take it apart. So I flew it with the stock throws for ailerons, elevator and rudder in the video below and it did just fine for my liking. I didn't use exponential rates and the directional for all three controls were set at %100 for my first few flights.

It was pretty easy to increase the throw of the ailerons. I simply followed the directions and moved the z-bend of the pushrod to the inner hole of the ailerone bellcrank. I left the top off until I finished adjusting the throws of the rudder and elevator. The rudder and elevator throws are adjusted just like any other airplane. I simply connected z-bend of the push rod to a hole closer to the control surface.

I set up dual rates with high end at 100% and 25% expo, and low end at 75% and expo at 10%. The high rate was way too touchy for my liking. It flew just right on the low rates, which ended up being pretty close to what it was at 100% directional before adjusting the throws.

For my personally preferences, I really didnt accomplish much by adjusting the throws. But now I can easily increase the throws in the future with the transmitter. Plus I got to see what the guts looked like by taking it apart. Although I'm sure I would have taken it apart right away anyway. Can't help myself!

Take a look at the video below to determine for yourself how well it flies! It was a bit windy when the video was taken, but she did pretty good!

Yes, unfortunately I have a lot of experience in this area...

I'll have to admit, I've already crashed the ParkZone Sukhoi a couple times with the worse damage being a broken prop. Even though the crashes were mild, I guarantee any one of my larger planes would have been either destroyed or out of service for a good while!

The ParkZone Sukhoi Su-26m wasn't quite as powerful as I expected. Don't get me wrong, it has plenty of power, but you have to fly it. There's no hanging on the prop or unlimited vertical. But after all, it's an airplane, not a helicopter. I guess I'm just used to my larger Sukhoi that is over powered.

Personally, the Parkzone Sukhoi is one of the coolest RC airplanes Ive ever owned. There are a lot of tiny RC airplanes on the market, some of them a lot smaller than this one. But you wont find another 4 channel RC airplane as small as the ParkZone Sukhoi that flies just like the big boys!

The throws are easily adjustable to make the airplane more sensitive to control input, although it flew perfectly for my flying style right out of the box.

It isn't overly powerful and you won't be able to hover around like a helicopter. But it flies extremely well, very similar to my larger Sukhoi.

Plenty of spare parts are available for the Sukhoi Su-26m BNF making it easy to repair any damage caused by "dumb thumbs".

You cant beat the price either. For $99 you get a 4 channel completely aerobatic RC airplane ready to fly with everything included. It costs more than that for a couple of batteries for my larger planes!

Since the Sukhoi Su-26m BNF is small enough to be safely flown almost anywhere, I finally have an RC airplane to share with my non-flying friends and family at just about any social gathering. I can definetely see how this airplane is going to attract more RC addicts!

Expect to see this new receiver in many more tiny aircraft in the near future, along with more powerful brushless motors!