Why Get an RC Paraglider?

If you're the type that enjoys nice and relaxing flights at the local park, an RC paraglider may be the perfect addition to your hangar.

A small trike or gondola powered by a fan hangs from a parachute-like wing.  Servos (usually mounted as the pilot figure's arms) pull the D-lines that changes the drag on each side of the wing in order to control the direction of travel.

Some of the high-end models have speed bars which are two additional servos that change the wing's angle of attack for better maneuver against the wind.

Most powered paragliders (PPG) are propelled by a pusher propeller mounted atop the gondola or trike. While most are powered by electric motors,  ParaLight Aviation has a very unique glow powered RC paraglider seen below on the left.

Non-motorized or slope paragliders are also available, and are much cheper them PPG's. It's a challenge to keep these guys in the air, but that's exactly what attracts many folks to them. If you like slope soaring or thermal gliding, than this may be right up your alley.

Radio controlled paragliders are controlled exactly the same as the full-scale version depicted in the above image. The only difference is the and brakes and speed bar are controlled by servos instead of a person.

The brake lines (typically referred as the D-line) controls the shape of the trailing edge of the wing or parachute. By pulling the left brake line, the left side of the wings creates more drag and causes the RC parachute to slowly turn the left. Same thing with going right.

Pulling both brake lines at the same time creates drag on both sides which slows the aircraft.

In essence the brake lines serve as both ailerons and the elevator.  This is exactly the same concept as elevons used with most flying wings. Most all computerized transmitters have a pre-program delta mix that will be needed for this set up.

An optional speed bar utilizes two addition servos that are attached to the leading edge of the wing that controls the angle of attack.

When the A lines are pulled down the glider gains more speed and less lift. Not only will this increase speed, as the video above points out this allows your wing penetrate much higher head winds than is possible without a speed bar.

Just as some folks go to great lengths perfecting every detail of their scale airplanes, serious modelers go the extra mile to make their pilot figures look and move just like a real human being.

Pretty neat how Sean transformed a simple toy doll into a realistic functioning paraglider pilot by creatively installing a set of servos.

Opale Paramodels specializes in RC paragliding equipment. They sell nice full functioning pilots with the servos already installed for you. These "BackPack" pilots are specifically designed to snap into their paramotor frames.

They also sell BackPack pilots with Speed Bar servos built right into the seat as seen in the photo above.

Where can you get one?

The guys over in the UK are serious about their RC paragliders!

If you're just an average Joe that wants to try your luck at flying an RC paraglider without spending a bunch of money, try check out some of the relatively cheap Ready to Fly RC paragliders on Amazon or Ebay.

Most of these can be had for under $100 and are completely ready to fly. 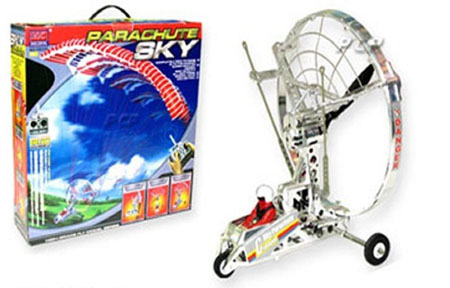