What makes a good RC Trainer?

A good RC Trainer is a stable, self-correcting airplane that can fly at very slow speeds. In other words, it's an airplane that's easy to fly when you're learning how to fly RC airplanes.

So how do you know if that sweet looking plane you have your heart set on is a good beginner plane? Good question...

Let's take a look at some of the key characteristics that make for a superb first airplane.  If you're in  a hurry you can jump on over to this list of the most popular RC trainer planes.

Your First Airplane Must Be Stable

A Good Trainer is Self-Correcting

If a beginner gets overwhelmed and lets go of the sticks while the airplane is banked, a good beginner plane will self correct back to straight and level flight.

This self correcting characteristic is accomplished with wing dihedral. The angle that an airplane's wing tips are pointed upward from the horizontal position is called dihedral.

A good RC trainer will have tons of lift allowing it to fly very slowly giving the beginer plenty of time to react and learn the controls. This is accomplished best with a flat-bottomed wing.

From our previous discussion about how airplanes fly, we know that the type of airfoil has a huge affect on the wings overall lift.

This produces much more lift than a symmetrical wing. More lift allows the airplane to fly much slower which gives the beginner more time to react.

is an example of a trainer airplane with a flat-bottomed airfoil.

Some trainer RC airplanes have semi-symmetrical airfoils. These are a step up from a basic trainer.

Since the wings will provide less lift, these airplanes will not fly as slowly before stalling. Semi-symmetrical airfoils will make a trainer airplane much more aerobatic.

If you think you will be a fast learner and have someone to help you, then you should consider a semi-symmetrical trainer airplane.

If you want to be safe and have the easiest RC airplane for learning to fly, then stick with a basic trainer airplane with a flat-bottomed airfoil.

Staying on the runway while taking off is serious challenge for beginners. It definitely took me a while to get the hang of it.

A steerable nose wheel is much less sensitive to the rudder input than tail draggers. That's why most all RC trainers are equipped with tricycle landing gear where the steering is controlled by the nose wheel.

Three bladed propellers are also a good idea to use on your first nitro trainer airplane. Three bladed props provide more thrust to get the plane off the ground faster for a short easy take-off.

When using a 3-bladed propeller the top end speed is much slower than a 2-bladed prop giving the pilot more time to react to the airplane. 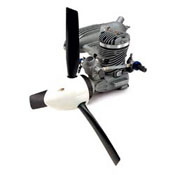 A 3-bladed prop will also slow the airplane down when the engine goes to idle.

The diameter of the blades on a 3-bladed prop are shorter than the blades of a 2-bladed prop. This is helps protect the propeller for those first landings, and they generally are rough ones!

Remember, a good trainer airplane will have:

Be sure to check out this extensive list of the most popular trainers on the market. If the RC trainer airplane you're interested in meets this criteria, you can rest assured that you are buying a good trainer aircraft.

If you're new to the hobby, I highly recommend taking a look at the pages below...