The Pitts Special is world's the premiere competition aerobatic machine that literally defined aerobatics as we know it. Designed in the early 1940's by Curtis Pitts, it was the first airplane designed specifically for flying aerobatics.

Nearly 50 years later it still holds it's own against the modern composite constructed monoplanes that currently dominate the Unlimited Circuit.

It's no surprise that the Pitts is also one of the most popular RC airplanes along with its successor the Ultimate Bipe.

This brief history lesson on the Pitts will make you appreciate her a bit more when you see her at the flying field.

The Birth of the Pitts

In the primitive years of aerobatics, the only planes available were heavy WW2-type bi-planes with the huge radial engines.

A Georgian man by the name of Curtis Pitts decided to build a smaller lightweight bi-plane with swept wings that would react instantly to the pilots' inputs.

He proceeded to design and build the very first airplane specifically designed to perform aerobatic maneuvers, the Pitts S1. 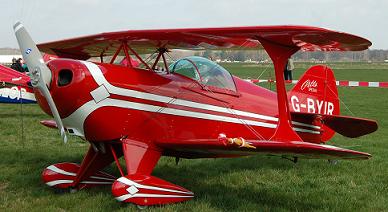 When the airplane was completed in 1944, Curtis tried and failed to get his new airplane certified 3 times. Finally he said "the hell with it" and flew it anyway.

Amazingly, this flight was recorded. Rumor has it that the inspectors may have seen this defiant flight as they came back with the certificate a few days later.

Betty Skelton and Her "Little Stinker" 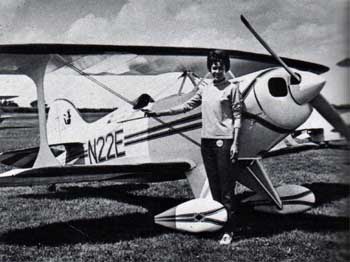 The Pitts became the most famous aerobatic airplane in the world when Betty Skelton and her Pitts S1 "Little Stinker" took the women's championship in 1948, 1949 and 1950.

This daredevil and her "Little Stinker" will always be remembered for coining the "inverted ribbon cut maneuver". Oh yes, that's when she would fly upside down and cut a ribbon strung between two poles only merely 10ft from the ground!

The Pitts Hits the Factory...

The only way to get a Pitts in those days was to build it yourself from a set of plans or a kit, and hundreds of pilots did exactly that!

Some thirty years later the Pitts Special became a fully certified production aircraft available to all. The factory in Afton, WY has changed ownership several times over the years. Originally Aerotek, then Christen, and now currently Aviat. 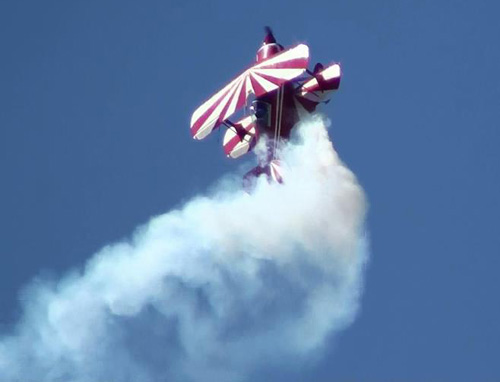 The Pitt S-2 is a larger two seat trainer version of the Pitts that came out in the late 60's. Even though it was designed to be a trainer, many pilots claim the S-2 handles better for aerobatics because it is larger and more powerful than the original S-1 version. The S-2 was dubbed the "Big Stinker".

Years down the road in the early 1990's Curtis designed the S1-11B, an even more powerful 300HP single seater. It's the "Super Stinker".

There are more variants of the Pitts Special than you can shake a stick at! But they all boil down to the S-1 or S-2 with different slightly different features.

The US National Aerobatic Team won the 1972 World Championships flying only Pitts Specials.

Even now, 50 years after it's creation, it remains competitive in aerobatic competitions and is arguably the best crowd-pleaser at air shows across the world!

It's worth noting that the engines used with Pitts these days are usually on the order of 3 times more powerful, says a lot for the sturdy design of those old  airframes that's for sure.

And Finally, The Ultimate Bipe!

I'm sure you've seen the "Ultimate Bipe" RC airplane either at the airfield or hobby shop, you ever wonder where it came from?

In the early 1980's a Canadian pilot by the name of Gordon Price redesigned the Pitts in an effort compete with the monoplanes that were taking over.

He called his plane the Ultimate Biplane. Its squared off wings and longer fuselage distinguishes from the other Pitts Specials.