What is a LiPo Battery?

What is a LiPo Battery? These batteries encapsulate enormous amounts of energy in compact lightweight packages.

They've extended flight times and drastically increased the power and performance of our RC airplanes.They've caused droves of people to ditch their slimy glow powered planes for nice clean and easy electric power...

But really... What is a LiPo battery? To answer this question we must first understand how batteries work...

In a nutshell, all batteries consist of a cathode, anode, and an electrolyte solution.

The cathode and anode (poles) are two different types of metals. The cathode is attached to the positive terminal of the battery and the anode hooks to the negative terminal.

The electrolyte solution is simply a medium that conducts electricity.

When a load (such as a motor) is placed between the two poles, a chemical reaction takes place that causes electrons to flow from the anode to the cathode on the outside of the battery.

Electrons will continue to flow until the metals in the battery are chemically neutralized (battery dead).

The voltage produced between the two metals is called the electrochemical potential. The amount or magnitude of this energy is is directly related to the types of metal used in the battery.

It just so happens that lightest metal in the universe also has the highest electrochemical potential with other metals. You guessed it, it's Lithium!

Lithium would be perfect for making lightweight powerful batteries right?

When the battery from my laptop recently died I couldn't resist opening it up to see what was inside. 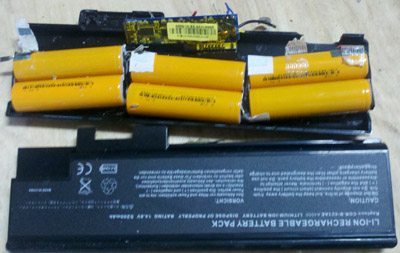 In the picture to the right you can see each of the rigid lithium Ion cells inside the battery casing along with a small circuit board.

Lithium-ion cells (Li Ion) use a liquid electrolyte solution that must be contained by a rigid cylindrical container. As you can see, the Lithium Ion cells in this laptop battery look just like a NiCd battery or any other common battery you are used to seeing.

This polymer can take any shape and does not require a rigid enclosure like the Lithium Ion cells used in the laptop battery.

LiPo batteries have a much higher energy density than other battery packs because the cells are not bound to cylindrical containers with dead space in between. T

he entire space of the battery pack is full of energy. No wasted space here. No added weight from metal cylindrical containers.

The next time I have a pack fail I will take it apart and post some pictures. I've taken old LiPo battery packs apart before. To me it looks a lot like a really long roll of plastic-like tissue paper with black powder packed between each sheet. There is not much to it really, it's kind of amazing.

As you can see in the laptop photo, there is circuitry (electronic chip) inside laptop batteries. This circuitry monitors the temperature of the pack as well as the voltage of each cell.

It also protects against over charge/discharge. There is similar protection circuit board inside most lithium polymer batteries.

You may have noticed that the LiPo battery above has two plugs on it. The larger blue plug is what provides the power to your airplane, and is also used for charging.

The small white one is the balancing plug. There are several wires on this plug. Each wire goes to a different cell of the battery pack.

It is extremely important that each cell in a pack stay balanced while charging, this is explained in detail on the LiPo charging page.

Aside from high energy density, the unique discharge curve of lithium polymer batteries makes them perfect for RC airplanes.

When using NiCd or NiMH batteries, the power and performance of electric RC airplanes will diminish substantially throughout the flight.

On the contrary, A LiPo powered airplane will maintain near top power and performance during the entire flight.

If someone asks you "What is a LiPo battery?", now you can answer them intelligently! Proper care of your LiPo packs will not only keep you safe, it will extend life of your batteries. You don't want to miss the pages below!


Home > Lipo Batteries > What is a LiPo Battery

Top of What is a Lipo Battery