My Rocky Start with FPV

I’ve been wanting to try FPV for a long time, all it took was a catalyst to set things in motion.

Whenever you get an email from the local hobby store informing you of a 20% off sale, you’re going shopping!

This is when I begin to think like a woman. No matter how much money I decide to spend, I’m actually saving money right? I knew you’d agree! 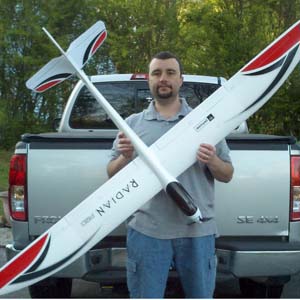 As I browsed the aisles looking for something to “save money” on, the Parkzone Radian Pro caught my eye. I’ve never had much of a desire to own an RC glider before, but for some reason something “clicked”. I had to have the Radian so I could finally try my luck at FPV.

I strapped my cheap little key chain cam to the wing and gave her a whirl. I found it very calm and relaxing watching my new plane glide peacefully high above the earth. Man, I wish I would have picked up a glider a long time ago!

What was even more impressive was this footage from the key chain cam. I’ve strapped this tiny camera on my planes before, but never gone this high and flown so smoothly. I was amazed at how far I could see and how beautiful it was.

I had planned on waiting a while before purchasing any FPV equipment. After all I just spent $200 on a plane right?

But ever since I seen the view from that key chain cam video I’ve had a one track mind. F-P-V day and night. I guess you could say I’m a little obsessed.
I poured over websites and forums searching for every morsel of information to help me choose the perfect set of video goggles. 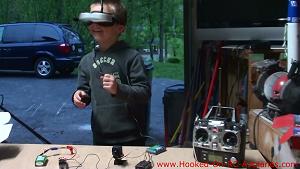 I compiled all of this research into a nice summary of the best video googles for FPV. In the end, I choose the Foxtech AIO Video goggles. You can find my full review here.

Along with the goggles, I ordered a Foxtech 500mw 5.8Ghz video along with a pan/tilt camera. After submitting the order I compulsively checked the tracking number several times a day to see if my new toy was any closer to home!

Finally, the day arrived. My wife called me at work to inform me that I had a package from China. It was quite a challenge to keep my mind focused on actually working for the remainder of the day!

This brings you up to the point where I filmed this video of the unpacking and installation of the AIO Goggles and equipment. 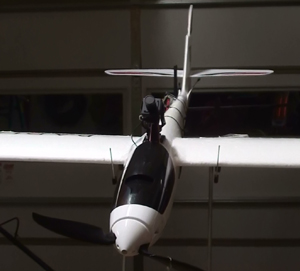 It was dark by the time I got my new eye in the sky ready for flight, so I had to weight until the next day to finally give FPV a try. Thankfully it was a Friday so I was spared from another long day of anticipation at the work place!

So far so good right? Well, keep reading. This story is about to get a little rocky...

When we arrived at the park and I gave my 6 year old son the honor of being the “passenger” on the maiden FPV flight. I gave her a toss. As she climbed to the sky I excitedly asked “what do you see through the goggles Cole?”

His reply? “I see scribbles daddy”. Well, obviously he had inadvertently pushed a wrong button or something right? I mean really, the goggles were working just fine last time I checked just a few minutes ago. So I asked my wife give it a try. She was able to catch the occasional glimpse of video as the model passed by, but that was about it.

It was like a balloon deflating as my excitement turned to disappointment. The picture in the goggles was absolutely beautiful as long as I stood next to the transmitter. At about 50 feet away that beautiful image quickly turned to static…

What could it be? Was it the goggles? Was it the video transmitter? How was I to know? What to do?

I definitely didn’t want to wait another few weeks for sending everything back to China. I wanted to fly FPV right now! Since I’m using my Futaba 7CAP 72Mhz radio system for control, I decided to buy a Foxtech 500mw 2.4Ghz video transmitter along with a set of clover leaf antennas from ready made RC.

Another several days of anxiously checking tracking numbers passed before I had my new equipment. With the new 2.4Ghz VTX I was able to keep that crystal clear image as I walked clear across the neighborhood, even with the stock whip antennas. It only took a second to strap the new VTX to the airplane. Back in business baby!

I picked up a stand alone Foxtech 2.4Ghz video receiver to feed video to my computer for recording the flight. I’m using the stock whip antenna with this RX so the video is a not quite a clear as the video through the goggles with the clover leaf antenna.

As you can see, I enjoyed at least 30 seconds of exhilarating heart throbbing FPV flight before nose diving my brand new Parkzone Radian Pro in to the ground breaking her to a zillion pieces…


Defeated… Yep, that’s how I felt. Absolutely defeated. Not angry, but depressed. Would I ever get to fly FPV? Am I doomed to failure? Should I just throw in the towel? Absolutely NOT!

I’ve got too much money and time invested in this to quit now. Plus I’m obsessed with it. At this point it feels like it’s my life mission to fly FPV. I will succeed!

I quickly determined that the crash was due to the failure of the BEC of the 30am Eflite ESC. I had total control of the throttle, but no servos. That’s why I went FULL THROTTLE into the ground while trying to pull up. Ouch!

I submitted a claim to Horizon and they said I needed to send the entire plane back to them so they could investigate. One of the factors they would look at was “if the plane looked to be flown nicely”. What? You’re joking right? This thing is in a zillion pieces!

I guess maybe the extra two servos for the pan/tilt may have burned up the BEC? I had a bad feeling I wasn’t going to get anywhere with Horizon. At least if I kept the plane I’d have the servos to use in the next plane, which is what I did. I’m a huge ParkZone fan, but I think I got hosed on this one. But we’ll leave it at that. As the old saying goes.. It happens…

I really loved how the Radian flew. As a matter of fact, I think I may get another one some day (with a larger ESC). But for now, I’m broke. Really broke. So I ordered the AXN Clouds Floater from Hobby King.

I’ve been flying RC for over 10 years and this “beginner plane” was kicking my butt on launch. I nosed dived on launch 4 out of 5 times. Lucky for me I was in a field with tall grass!

I think it has to do with it being a pusher prop. I’ve read where nose plants on launch is not uncommon with the AXN Cloads Floater, even without the extra weight of FPV video equipment. The only way I can confidently launch her is to have a rubber band holding the elevator stick down on launch. Once airborne I snap the rubber band off and she flies great!

While still fairly shaken by the Radian crash, I flew the AXN for several minutes before mustering up enough nerve to put the video goggles on. I thought it was a bit odd I had to trim the ailerons all the way to the right? But who cares, it was flying straight now so I put the goggles on…

After a couple of seconds which seemed like a decade, my eyes finally adjusted and was able to see the image in the goggles. Finally, I was flying FPV! Well, at least for about 15 seconds until I death spiraled to the ground nearly hitting a herd of cows. You really you have check the video out on this one.

This EPP foam is some amazing stuff really, the plane was not damaged at all. After close examination I noticed where the set screw came loose on one of the aileron control rods allowing the ailerons to get out of whack. Thus the need for the excessive trimming and unfortunate crash. I was so concerned about FPV I neglected the most basic pre-flight checks. Live and learn I guess.

Time to break out the Champagne! After nearly two months of frustration and a lot of money, I finally completed my first FPV flight. It was awesome, and I can truly say well worth my perseverance.

I haven’t had this kind of adrenaline rush flying RC in nearly 10 years. I could barely stand by the time I landed for shaking too much. By the way, I now bring a chair with me a I find it much easier to fly FPV when I’m not worrying about my legs giving out!

More of my FPV Videos

I’ve had several successful flights since, one of with the propeller falls off in mid flight and I greased the landing. My videos may not be as exciting as some of the other FPV videos out there, but they’re exiting to me and I absolutely love to share them. I will keep them coming whether anyone watches them or not!