In order to appreciate Gee Bee model airplanes you first have to acquaint yourself with the &quotGolden Age of Air racing&quot. To put it in simple terms, the pilots and designers in the 1920's and 30's were absolutely crazy about aviation.

And I don't use the term &quotcrazy" lightly! No pesky government regulations, not even the fear of death itself was enough to deter these daredevils from pushing beyond the limits in pursuing their dream of having the fastest airplane in the National Air Races!

Without question, the most sought after feat was to be the winner of the infamous Thompson Trophy race, held every September in Cleveland Ohio . Unlike the other air races of the time, this was not a timed event where each plane competed solo. Oh no, this was an actual race from start to the finish. Back in the day some referred it as a horse race in the sky!

The course distance was about ten miles with each turn marked by a giant fifty foot tall pylon. The airplanes flew so low that the crowd in the stands could watch the entire race unfold right before their very eyes. The thunderous roar of the radial engines shook the excited fans to the core as theses monstrous machines would knife-edge around the pylons.

They watched anxiously as these birds came screaming by wingtip to wing-tip battling for each position. Who would take the lead? Would there be a crash? Who would... loose their life that day?

Unfortunately it wasn't uncommon for crashes to take the lives of talented young pilots during this era. As a matter of fact Marine pilot Captain Arthur Page lost his life in the 1930 inaugural Thomas Trophy race when he lost control of his Curtis F6C-6 Hawk in lap seventeen right in front of the grandstands. Several of the pilots who took the Thomas Trophy ended up dying in later crashes shortly after winning.

As sad as it is for those young men to have lost their lives during this era, it may comfort you to know that they didn't die in vain. The fierce competition lead to many innovations that we take for granted today. Retractable landing gear, super charged engines, flaps on the wings, aerodynamic cock pits are just a few. As a matter of fact, the infamous Spitfire was modeled after one of the marine racers of this era. But I digress...

Five brothers of Springfield Massachusetts, the Granville Brothers, grew up as aviation buffs and started their own aircraft repair business. In 1930 they expanded their operation with the intent of building and selling extremely fast line of &quotGee Bee Sportster" racers. Unfortunately this was about the same time the Great Depression began to bear down on the economy. To put it bluntly, they were broke. The prize money of the National Air Races enticed them to modify some of their planes to compete for some much needed cash. 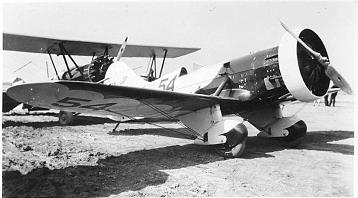 Their first two planes they modified for racing was the &quotModel X monoplane" and the &quotModel Y Senior Sportster&quot. This racing for money thing seemed to be working well for them, so they set their eyes upon the 1931 Thompson Trophy with their Gee Bee Z.

Most of the photos on this page were taken from a site called Golden Age of Aviation. There are tons of pictures of other Gee Bee Models there as well. I highly recommend checking it out.

The Granville Brothers were pretty sharp engineers. They were using wind tunnels long before most of their competition. Their goal was to fit the largest engine possible into the smallest airframe. The end result was the Gee Bee Model Z with its short wings attached to the infamous teardrop shaped fuselage with a cock pit right in front of the vertical stab. Piloted by Lowel Bayles,The Gee Bee model Z won nearly every race in 1931 including the coveted Thompson Trophy. 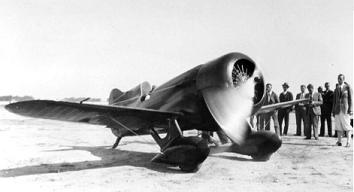 Bayles even established a world speed record for land airplanes of 267.342 miles per hour while qualifying for one of the races that year! Sadly, Bayle's life ended when one of the Mode Z's wings failed while attempting to set another speed record later that year with the same airplane with a larger engine.

With the Model Z obviously out of commission the Granville Brothers, along with another engineer they hired, designed two new racers for competition in 1932. These were the Gee Bee R1 and Gee Bee R2. 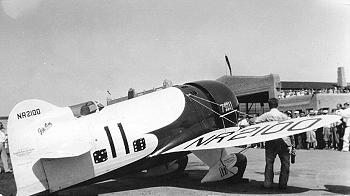 The R1 was built for short range all out speed competition such as the Thompson Trophy race. 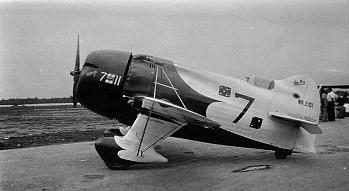 The Gee Bee R2 was designed for cross country duration races such as the Bendix Trophy race.

The only major difference between these two airplanes was the engine size and fuel tank capacity.

In 1932 pilot Jimmy Doolittle not only won the Thompson Trophy race, but also set a new land speed record of 296 miles per hours with the Gee Bee R1. The Gee Bee R2 piloted by Lee Gehlbach came in fourth place at the Bendix Trophy race and took 5th in the Thompson Trophy. This was definitely the pinnacle of the Granville Brothers and the Gee Bee line of airplanes. Now on to the rather sad part of the story...

The Fall of the Gee Bee

The following year the Gee Bee R2, piloted by piloted by Russell Thaw, stalled upon the landing approach in Indianapolis Indiana as he was stopping to refuel during the 1933 Bendix Trophy race from New York City to Los Angeles. One of the wingtips struck the ground but the pilot was not seriously injured.

On that very same day participating in the very same race, Pilot Russ Boardman wasn't as fortunate. Boardman's Gee Bee R1 stalled during take-off from the Indianapolis refueling stop and he lost his life. A short time later in the same year Pilot James Haizlip destroyed the repaired Gee Bee R2 while trying to slow down after a hot landing.

With both of their racers destroyed, the Granville Brothers took parts from both and cabbaged them together to make another plane known as the R-1/R-2 Hybrid Gee Bee. On a test flight it took pilot Roy Minor thirteen tries to land only to end up somersaulting the airplane after the wheels caught a drainage ditch.

Pilot Cecil Allen bought the Hybrid and made some design changes such as placing a larger fuel take further behind the center of gravity in addition to a new and larger wing. The Granville's objected to the design change and warned Allen this would make the airplane dangerously unstable. Sadly, Cecil Allen refused to listen and was killed when taking off from Los Angeles in the 1935 Bendix race.

At this point all of the Gee Bee special racers and most of the Sportsters had been crashed. Many of lives lost. Even the oldest brother Zantford Granville lost his life when he crashed one of the Sportsters while flying it to the customer.

Were the Gee Bee airplanes death traps? Or were they some of the best racers every built? I suppose that's all a matter of opinion and has been the center of some fierce debates over the years. But the fact remains that the Gee Bee racers were beautiful, extremely fast, unique racing machines that were extremely difficult to take off and land.

Although the string of tragic events in the mid 1930's put an end to the Granville Brothers aviation business, the infamous Gee Bee racers shall live on forever through the means of model aviation.

Please follow the link below to share the story and pictures of your RC Gee Bee. Let us know how long it too you to build, whether it as an ARF, kit or built from planes. Was it as difficult to fly as you anticipated? If you have any video, especially your landings with your model Gee Bee by all means please share it!

Join in and write your own page! It's easy to do. How? Simply click here to return to Scale RC Airplanes.

by Will Tucker
(Memphis, TN, USA) This thing takes off and flies like a dream but landing is quite a challenge. Yes sir, this is one of those birds that you have to "fly in".

The main reason that you have to keep the airspeed up is really to keep air flowing over the control surfaces - otherwise they become very unresponsive. Its always fun to have a challenge though!

Join in and write your own page! It's easy to do. How? Simply click here to return to Scale RC Airplanes.